Will we get the R&D reforms we want at this week’s World Health Assembly? 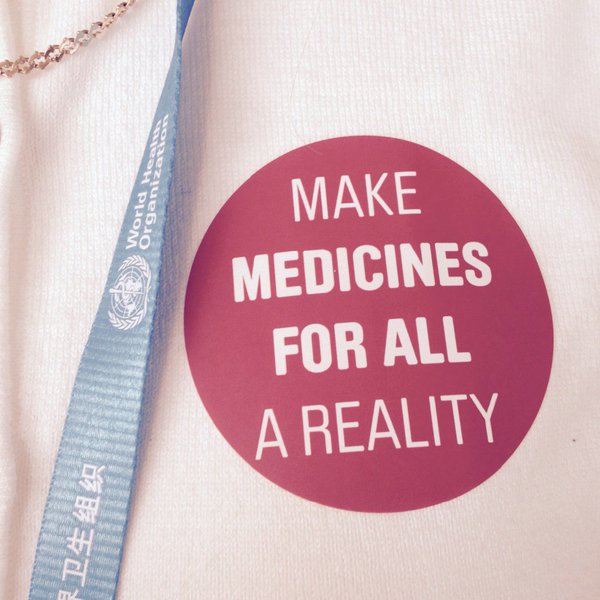 This week is the World Health Assembly where a resolution on Research and Development will be drafted and agreed upon by member states.

This is a moment the Missing Medicines campaign has been working towards for quite some time with over 6,000 people taking action around the country over over the last 8 months! We will see this week if our hopes for reforms to the way we develop medicines have been achieved. Can we find new ways to finance R&D that doesn’t lead to high prices? And can we ensure that public health need, not PROFIT, is the driver of medical innovation? It all lies in the balance.

At the beginning of May STOPAIDS attended the open-ended meeting of the Consultative Expert Working Group on Research and Development (CEWG) held at the World Health Organisation in Geneva. The aim of this meeting was to discuss all the ideas that had come out of the CEWG report, such as: a pooled fund for R&D, a global observatory to encourage collaborative research and priorities to be set and finally the idea of establishing a legally binding R&D agreement that would underpin these initiatives and ensure that the financial and coordination burden for global health R&D is shared. At the end of this meeting member states were to agree upon certain commitments and draw up a draft resolution that would be finalised at the WHA.

In summary, the meeting was good in that certain member states (Columbia, Brazil and South Africa) raised the issue of the R&D treaty; France and the Netherlands made important interventions about the high cost of medicine and there was broad agreement over the plan to establish an R&D Observatory. It was also great that civil society was able to make interventions and were very active through the meeting stressing the need to ensure that the CEWG process goes beyond neglected tropical diseases (NTDs) and also incorporates AMR and Cancer; recognition that high prices are a market failure and need to be addressed with de-linkage; and the need for governments not to outsource R&D priority setting, coordination and norms. There was also a presentation from Ruth Dreifuss, chair of the UN High Level Panel on Access to Medicines, a good signal that coherence between the CEWG process and the HLP is considered a priority. 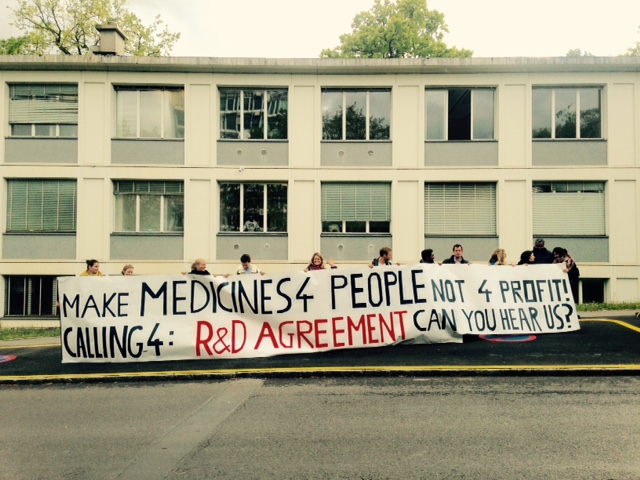 STOPAIDS and others also made sure we bought some activism to the event to remind member states that there are lots of people from outside this process who are watching and waiting for progressive decisions to be made. We made some great stickers and staged a demo after the meeting outside of the WHO to get delegates attention as they walked back to their hotels.

Unfortunately there were also frustrating things about the meeting. The discussion on the R&D treaty never developed any further than the few mentions it got from a couple of member states and when it came to funding there was no consensus made. The UK delegate said that the UK already gives enough to R&D and whilst they support the idea of a pooled fund they won’t actually make any financial contrition towards it. They also said that they don’t support the idea of an R&D treaty as they feel these things take too long to implement, chasing member states to ensure they fulfil their commitments. They are keen to get the R&D Observatory up and running though and said this is the first step to identifying the gaps in research and funding, which indicates that they could be willing to be convinced with more evidence about the need for a pooled fund.

On the last day the meeting was closed to civil society as member states began to negotiate a draft decision point. You can read the draft as it is so far here. Currently there are only a few paragraphs that have been agreed (in yellow) the rest is in brackets which means it is still under negotiation. Civil society has been able to influence this text and have in-putted important points around shared responsibility; language about policy coherence with the upcoming report from the High Level Panel on Access to Medicines (which has the potential to be a much more transformational process) and the right to achieve the highest level of health. There are also good points around establishing a financing mechanism and considerations of reaching the 0.01% benchmark for R&D. However the draft doesn’t recognise that market failure is also an issue in developed countries (this has been noted on work on AMR – and although policy coherence is specifically mentioned as a goal, AMR is considered outside the scope of the CEWG) nor is access to medicines considered an issue outside of the developing world. So although the international element is missing within the resolution and the R&D treaty is not mentioned, there is still the potential for some solid commitments around the R&D observatory, hopes around securing financing and ensuring policy coherence with the UN High Level Panel on Access to Medicines with a plan set for another open-ended meeting once the HLP report comes out.

The R&D agenda point will be discussed on Friday and this week the Missing Medicines campaign will be visiting the Department for International Development to hand in our petition with a letter that sets out the argument for why the UK government must support reform to our R&D model if they want to ensure we champion human rights over intellectual property rights and fulfil their commitments to the SDGs.

Stay tuned for updates on the outcome.