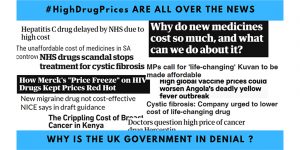 This week in Geneva a resolution is being voted on which could help make drugs more affordable around the world.

Yet we’ve discovered that the UK government is trying to undermine the resolution at this week’s World Health Assembly – and is even pushing for all references to “high prices” to be taken out. This is an outrage.

High prices are a big reason why people are not getting the essential medicines they need, in the UK and around the world. Denying that they exist is not an option. The UK should be backing, not blocking, this global effort to make medicines more affordable.

There is a global crisis of high medicine prices. We’re seeing it in the news more and more, with patients unable to access vital drugs like Orkambi, which could be lifesaving for people with cystic fibrosis. And this is even more serious for people in the global south.

High drug prices also impact on healthcare services like the NHS which is already rationing and rejecting effective new drugs because they are too expensive.

This week’s resolution on drug pricing transparency is supported by Italy, Malaysia and South Africa, along with seven other countries. The aim is to remove much of the corporate secrecy over drug prices, research and development costs, and public contributions to drug development. Having this information would radically improve the negotiating position of governments in price negotiations with big pharmaceutical companies. And this is part of our vision for a health system that works for all, not just corporations. But rich countries, including the UK, are piling in and making changes to the wording of the resolution to water it down and make it voluntary.

Exposing this latest UK government capitulation to the pharmaceutical industry’s lobbying is part of our People’s Prescription campaign. Together, we’re pushing the issue of drug pricing up the political agenda, and promoting proposals for overhauling our current corporate-controlled system of drug research and development that can make a real difference to millions of people around the world.

We’re asking health secretary, Matthew Hancock, and international development secretary, Rory Stewart why the UK government is in denial about this global problem.

Can you tweet Matthew Hancock and Rory Stewart to expose the UK’s outrageous attempts to pretend #HighDrugPrices are not a problem?

If you don’t use Twitter, can you email Matt Hancock and Rory Stewart instead?