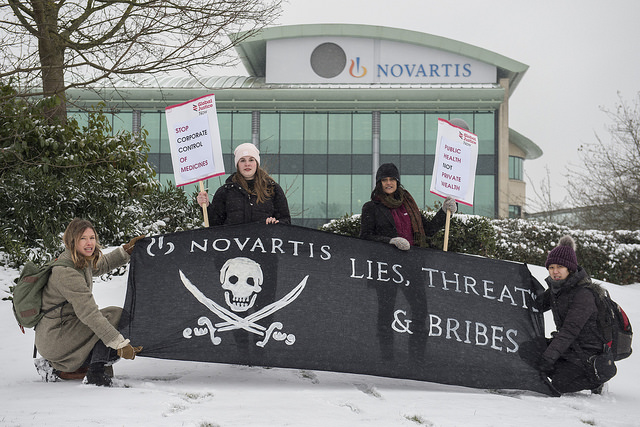 Friday 2 March 2018 – Swiss multinational Novartis yesterday faced international calls from an alliance of health campaigners for an end to its ‘threats, lies and bribes’ towards governments over access to life-saving medicines, on the eve of the company’s AGM in Basel, Switzerland which took place today (1).

Protest actions took place at Novartis offices in the UK, South Africa and Malaysia demanding the company respects the right of governments to use legal mechanisms to make essential medicines more affordable. It follows the recent leaking of threatening letters Novartis sent to the Colombian government over the price of a leukemia drug in 2016.

The letter leaked by Public Eye show Novartis’ then-CEO writing to the President of Colombia in 2016 to stop the government from exercising its legal right to make a leukemia drug affordable. Novartis had previously priced the drug, imatinib, sold by Novartis as Glivec, at $15,000 (£11,000), twice the average person’s income in Colombia (2).

The scandal is the most recent evidence of the undue pressure that governments face when trying to tackle unaffordable medicine prices charged by big drug companies. Under international trade rules, developing country governments have a legal right to break the patent monopoly held by drug companies over a medicine in the public’s interest (3). This enables other companies to produce and sell the medicine at a much cheaper price. Yet countries that have tried to implement any flexibilities have faced enormous pressure by pharmaceutical companies, including Novartis, as well as developed countries’ governments, to stop such use.

This month the Pharmaceutical Research and Manufacturers of America, of which Novartis is a leading member, requested that the US government considers trade retaliations against countries taking steps to put patients access to medicines ahead of intellectual property rights (4). And this week it was revealed that US trade rep, Robert Lighthizer, has written to the Colombian government to warn that “key stakeholders remain dissatisfied” with its policies on access to medicines (5).

As part of the day of protest, campaigners sent a letter to the Novartis chairman calling on him to ensure the new CEO, Vasant Narasimhan, does not use these bullying tactics against governments that are trying to protect the lives of their people. (6)

Saoirse Fitzpatrick, of STOPAIDS in the UK said:
“TRIPS flexibilities were put in place to safeguard the human right to health which includes access to affordable medicines. They are entirely lawful. It is an outrage that whenever a country tries to use them they are met with such a vicious backlash from the industry and, in some cases, other governments. We need to expose this behaviour and send a message to the industry that they won’t get away with it.”

Andrea Reyes, Deputy Director of Misión Salud, Colombia, said:
“Today Colombia is battling a number of issues, from the high prices of medicines and abusive pharmaceutical monopoly behaviour to recovering from 50 years of conflict and the devastating consequences of drug trafficking. We need big pharmaceutical companies to support our development and fulfil their social function. They should make medicines affordable and instead of bullying our government, they should respect and support the right of our government to use legal mechanisms to help people access the life-saving medicines they need.”

Francisco Rossi, Director of Fundación IFARMA, Colombia, said:
“Pharmaceutical companies say that using the flexibilities of TRIPS is to ‘ignore’ or ‘breach’ the patent system. That’s a lie. Licenses exist and can be used, as established by the legal regime of the subject. Meanwhile, health systems pay very high costs for medicines. It is a mistake to look at health issues in terms of the market. In the case of health, we are talking about the possibility of someone worsening their living conditions or even dying. ”

Heidi Chow, a campaigner from Global Justice Now in the UK, said:
“The revelations from Colombia are not an isolated incident, but a pattern of behaviour by Novartis of threats and bullying in pursuit of vast profits at the expense of ordinary people. Countries have a legal right – as well as a moral duty – to use compulsory licences to make medicines affordable for their people. Governments should not be bullied by big pharmaceutical companies out of using their legal right to ensure that people can afford life-saving drugs.”

Leena Menghaney, a lawyer working on access to treatment in India:
“Novartis is pressuring the Colombian government over the exact same patent that was rejected by the Indian government for evergreening. The patent on this drug in Colombia appears unjustified and certainly so is Novartis’ pressure on governments to enforce this patent over saving the lives of cancer patients.” (8)

Novartis has also been implicated in a major corruption scandal in Greece this month for allegedly bribing senior politicians – 8 former ministers and 2 former prime ministers – in return for securing higher drug prices in Greece and the rest of Europe, including the UK (8). The company has also previously been fined for a number of documented cases of illegal kickbacks in the US and South Korea (9).

1. The Novartis AGM is taking place on Friday 2 March in Basel, Switzerland.

3. Governments have the legal right to issue a compulsory licence enshrined in the World Trade Organisation Agreement on Intellectual Property Rights (TRIPS). A compulsory license enables a government to allow another company to produce a patented drug without the consent of the patent owner. Countries can determine the grounds for granting compulsory licences.

The use of TRIPS flexibilities is within the rights of governments under the TRIPS agreement and the Doha Declaration, which affirms that the agreement should be “implemented in a manner supportive of WTO Members’ right to protect public health and, in particular, to promote access to medicines for all…” and “…reaffirm[s] the right of WTO Members to use, to the full, the provisions in the TRIPS Agreement, which provide flexibility for this purpose’’.

4. PhRMA submission to Office of the US Trade Representative, February 2018.
It states: “Medicines discovered and manufactured by PhRMA member companies are the constant target of compulsory licensing and other harmful practices that deny the most basic intellectual property protections”.

6. A copy of the letter is available here.

7. Novartis has previously caused uproar amongst activists over the same drug, imatinib (brand name Glivec). Over half a million people signed a petition to challenge Novartis as they took the Indian government to court over their rejection of the company’s new patent claim for imatinib, also known as ‘evergreening’. Eventually the Supreme Court rejected the company’s challenge.