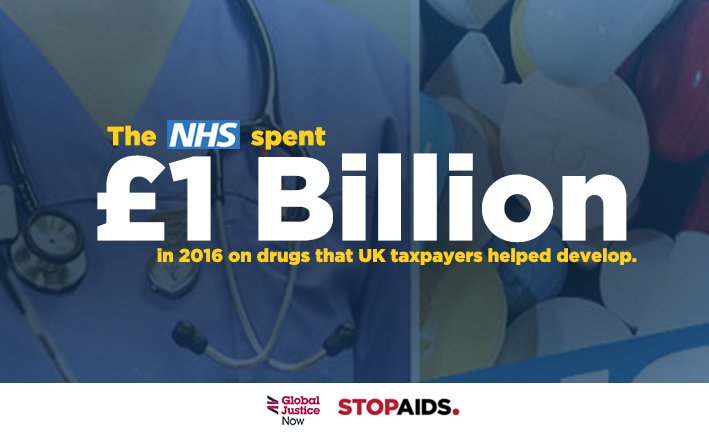 Treatments for cancer, arthritis and multiple sclerosis (MS) are among drugs costing the cash-strapped NHS over a billion pounds a year – despite public funding playing a substantial role in the medicines’ development.

The new report, Pills and Profits: How drug companies make a killing out of public research by STOP AIDS and Global Justice Now, is backed by over 20 health and patient organisations. It calls for attaching strings to taxpayer funding,  greater transparency in drug pricing, and for a radical overhaul in the way the research and development of new medicines are funded.

The pharmaceutical industry often claims that high prices are a direct result of high research and development costs. However, the process for setting prices is shrouded in secrecy.

The new report shines a light on the level of UK public money used to develop new drugs – with two out of five of the NHS’s most expensive drugs discovered using substantial public money.

The report discoveries include:

Heidi Chow of Global Justice Now, one of the co-authors of the report said:
“Big pharmaceutical companies are ripping us off by taking over drugs developed with substantial public money and selling  the drugs back to the NHS at extortionate prices. This is nothing short of daylight robbery of British taxpayers by some of the most profitable corporations in the world. As the NHS is on the brink of another winter crisis,  it’s about time politicians take a stand to ensure that drugs produced from publicly funded research are affordable for the NHS.

“Across the world, 10 million people are dying needlessly because they can’t access vital medicines. The government must take action to ensure that UK-funded research benefits public health globally rather than lining corporate pockets.”

Tabitha Ha of STOPAIDS, one of the co-authors of the report, said:
“At a time when our NHS is already strapped for cash, we must end the scandal of the public effectively paying twice for the same medicine – first to develop it and then again to stock it. It’s not just British patients that are being delayed or denied the medicines they need either. Patients in the world’s poorest countries are being ripped off too, even when generic versions are available at a tiny fraction of the price. We need greater transparency and a radical rethink on how we fund the development of new medicines.”

Melanie Kennedy, Just Treatment patient-leader, said:
“High medicine prices have affected me very directly. I had to crowdfund to pay privately for cancer treatment to prolong my life, as these expensive drugs were not available on the NHS at the time I needed them. I felt like I was having to beg for my life, but when you are 40 and have a small child you do whatever you can to try and raise your kids.”

You can read the full report here.