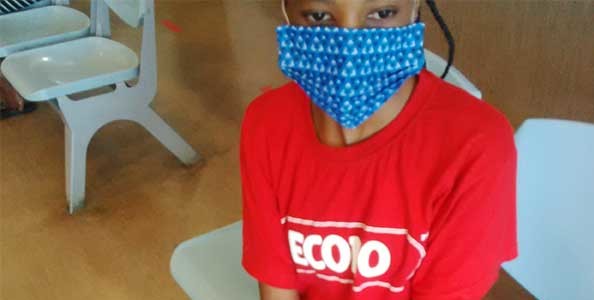 23 year old Nikiwe Gwebani is a Multidrug-resistant (MDR) TB patient living in Khayelitsha one of the biggest townships in Cape Town, South Africa. She was Diagnosed with MDR TB on the 14th of December 2015 after showing some signs of TB in October which included fever, night sweats, head aches and loss of weight.

She went to the clinic and tested for TB and HIV, her X ray results showed that she had TB and she was given treatment for normal TB. In November the clinic did a sputum test on her and that’s when she was discovered that not only did she have TB but she had Multidrug-resistant TB.

This meant that she now had to stop taking her drugs for normal TB and take treatment for the MDR TB which included an intake of almost 18 pills on a daily basis and a painful injection known as kinomicin each day with the acception of weekends. Nikiwe explains how her bum had bumps from the injections, and how it was difficult for her to even sit some times. She also explained how the medication just exhausted her and made her un-able to do anything for the rest of the day accept sleep for over 7 hours after coming back from the clinic and still have sleep at night when it was time to go to bed.

“I always looked forward to weekends to get a break from the injections” she said.

This Public Relations third year student has to travel everyday to her local clinic for her daily dose of pills and injections, at first she say’s it was very hard for her to accept that this was going to be a daily routine for her and that she initially thought the injection would be a one-off thing and she would get better. She didn’t understand that she would have to take so many pills everyday for two years according to the doctors, depending on how well her body responds to the treatment.

“I struggled with this fact at first, I couldn’t understand why I had MDR TB and that I would have to be isolated from my family and the people I loved, but because I wanted my health back I had no choice but to accept.“

Gwebani tells of an incident when she travelled to the Eastern Cape for emotional sapport from her parents, she went to Madwaleni hospital to start her MDR TB treatment when she got there she was told she would have to be admitted in isolation as she was a huge risk to her family and could infect them with MDR. She was at the hospital for three days without treatment as the nurses kept telling her that the treatment still needed to be ordered and people around her in the hospital were in terrible condition, they looked sick almost like they were dying she said. She would ask the nurses then why am I being kept here without treatment and demand that she be sent home, till her family decided to discharge her and agreed that it would be best for her if she got her treatment back in Cape Town, where there at least she wouldn’t be isolated she could travel daily to the clinic for her treatment.

“Now I have accepted that I have to live with MDR TB for almost two years, I try not to stress much! I just want to get ovet it and move on with my life because this disease has stopped my plans of continuing to be involved with my TV commercials and plans I had of travelling to Johannesburg” Said an upbeat Gwebani.